As usual, it’s been a busy weekend. On Saturday, we were out bright and early to set up for a birthday party celebrating our client’s husband’s 40th birthday. Apparently, he’d informed our client that he’d been very impressed by a hog roast Boston catering at a work event. So much so that he’d mentioned it a few times, so when she was considering how to cater for his upcoming significant birthday event, it’d been her first thought.

As she’d not previously experienced the whole-hog spit-roast style of catering we offer, she was pleasantly surprised to find out that it’s not just about the hog roasting. As she obviously wanted to make sure everything was catered for as smoothly as possible, she’d initially imagined that a hog roast Boston involved just that, and when she contacted us to make enquiries about the date, she realised that our menu options are much more varied. She was keen to point out that she was especially pleased with the extent to which we were able to accommodate her wish to also provide desserts, as this removed what she’d thought would be another entirely separate aspect to catering for the party.

So when we arrived and started off the slow roasting process on our purpose built machine, we then found ourselves kept busy preparing copious amounts of salads and desserts. Our client had specifically asked for chocolate cheesecake as this is her husband’s go-to choice of dessert every time they find themselves in a restraint with it on their menu, so once she’d ascertained we could provide the desserts as well as succulent, tasty hog-rolls, it was something of a no-brainer as to exactly what the dessert would be. 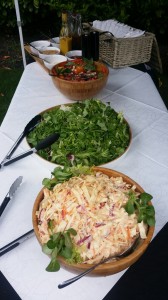 By the time the guests started arriving, the hog was just cooked to perfection, and the salads, (including the specified coleslaw made with a view to fulfilling our client’s specific guidelines regarding the texture and consistency her husband had on many occasions told her he considered optimum, as we try to make our food as ‘bespoke’ as possible) had been freshly prepared and set out to allow the guests to choose which they’d like to accompany their rolls. I served up the slices of pork into the fresh bread rolls and directed the guests to the crackling and condiments.

It wasn’t until the guests had all had the opportunity to sample the hog rolls that the cheesecake was unveiled, as we’d also had strict instructions from our client that the desserts should be initially hidden as significant amounts would probably mysteriously vanish before the hog rolls had been served if her other half had his way.

By the time we were packing up, it was obvious that she may have been bang-on with this prediction, as the desserts were definitely consumed with as much gusto as the hog rolls. A great day for hog roast Boston!