This month, the Hog Roast Retford team were hired by a local client in Doddington for a surprise 50th birthday party. The party was hosted at the Dog Adventure Paddocks in Doddington in a large marquee that was heated to protect the guests from the cold winter weather. The team was hired by the Alyssa who did a brilliant job of organising the party. 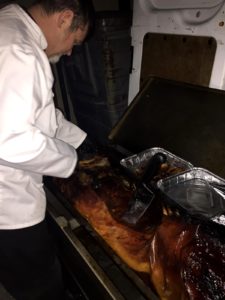 Alyssa selected the Hog Roast Retford team’s Menu One which was presented as a buffet as a included a fantastic whole slow roasted hog as the centrepiece. The roasted hog was served alongside apple sauce, crispy crackling and homemade stuffing. As an alternative, the Hog Roast team served vegetarian option of vegetable skewers to ensure that there was something for everyone on the buffet. Alongside the hog meat, soft bread rolls were placed on the buffet. The meat was cooked in the team’s professional Hog Master Machines which helps to create the wonderful crispy crackling. The team use locally sourced ingredients so their food always tastes fantastically fresh.

The Hog Roast Retford team were tasked with providing a large buffet spread to 100 people and ensure that it was also laid out on the buffet table at the same time. The buffet was to be served at 6pm for an evening service and the team worked hard to meet the deadline. The service was led by the Hog Roast Retford’s Head Chef, Rob, who ensured that all of the food was evenly cooked.

The surprise was pulled off and the guests ensured that the party was the best night that it could be. The Hog Roast team delivered all of the food on time and all of the guests thought the food was delicious. Many of the guests returned for second helpings from the buffet table and the food went down a treat. The team worked hard to keep the buffet table well stocked with fresh food. The service was fast and friendly and complimented the atmosphere of the party well. Alyssa was very pleased with the service and was looking forward to hiring the Hog Roast Retford team again.