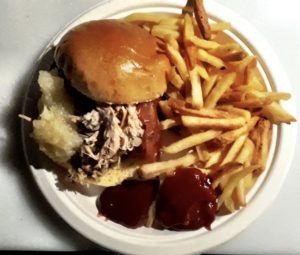 the pig on a spit inside a heated oven machine to mimic the traditional method of outdoor spit roasting. This helps to evenly cook the meat in the traditional manner to make the meat deliciously tender without the roaring fire and outdoor space required for traditional spit roasting. In addition, it helps to create crispy crackling which is served alongside fresh bread rolls and wraps. In addition, to accompany the meat on the buffet table, the team used fresh and locally sourced ingredients to create homemade apple sauce and stuffing. In addition to the normal menu served, Ryan requested that the Hog Roast team serve chips with an arrangement of sauces. Furthermore, to suit the casual atmosphere, the team served the food on disposable crockery with disposable cutlery which was discreetly cleared away after the service by the team.

As a vegetarian option, the Hog Roast Barton-upon-Humber team made lightly grilled vegetable and halloumi skewers which were served with pitta bread and a tzatziki dip. Overall, the buffet was to serve 100 people and so it was essential that the Hog Roast team made enough food for all of the guests to have second helpings. The food was served at 8pm and the Hog Roast Barton-upon-Humber team worked hard to meet the deadline. In addition, they arrived many hours before the serve time to freshly prepare the food on site The Hog Roast team was led by Rob, their Head Chef, who ensured that the service ran smoothly and all of the food was cooked to perfection.