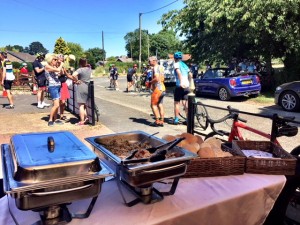 Hog Roast Horncastle caters all kinds of occasions both locally and further afield, and we are often asked to provide the food for charity events. Just recently, we had the pleasure of catering for 550 guests in Hemingby, at the village hall, which was a lunch stop for cyclists on the Castle to Coast to Castle annual charity bike ride.

Castle to Coast to Castle (also known as C2C2C) is a 100-mile/200km bike ride in aid of charity that starts and ends at Lincoln Castle. In 2011, C2C2C was set up to get more people cycling while raising money for charity. Riders cycle through the stunning Lincolnshire countryside, following a suggested route to the coastal Chapel St Leonards, with people either riding in teams or by themselves. The charities being supported in 2018 are St Barnabas Hospice, the International Bomber Command Memorial Centre and Cycling without Age (Skegness), though entrants can also raise money for a charity of their choice instead.

On the day of the event, our Hog Roast Horncastle chef Rob and Katarina were kept very busy outside in the sunshine, preparing, cooking and serving hog roast rolls. We were grateful for the shade from the sun with our gazebo. With the cyclists arriving in clusters of around 50 to 60 riders at a time, it would have been a nice, chilled out day, but instead, they came round the corner like it was the Tour de France, all eager to enjoy our scrumptious food! After three hours of non-stop service, with Rob pulling the pig and Katarina serving the hungry and tired riders, we could finally relax and have a breather, while the cyclists themselves still had a way to go until the end of their ride. 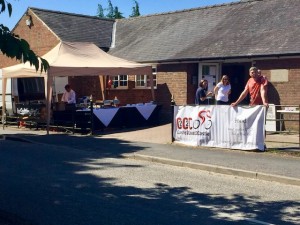 The cyclists were all very pleasant and thankful for their hog roast, which we served in either a roll, wrap or pitta bread, depending on personal taste, together with our lovely homemade apple sauce and sage and onion stuffing and, of course, crackling carved straight off the pig. Hog Roast Horncastle had a great time feeding the well-deserved cyclists and we hope to see everyone next year too!